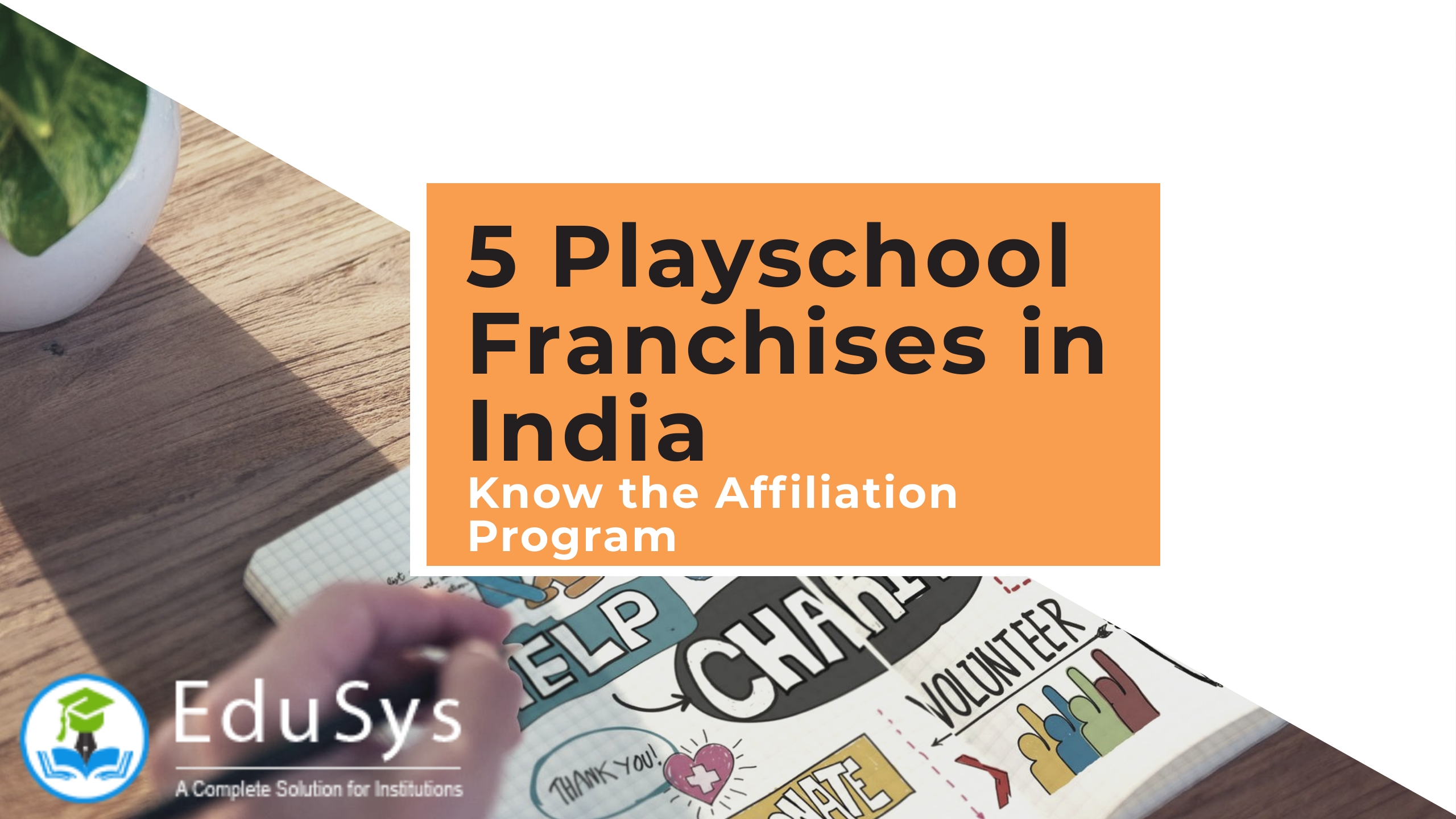 Preschool/ Playschool school franchise in India has numerous opportunities at low investment. The idea of early childhood education in India has been growing quickly in the present times. While there are a number of preschools franchisers with different marketing strategies in the country, here are a few key playschools and primary schools in India that are mainstream than others.

Parents are more worried than at any time in recent memory with their children's future and are eagerly investing in the most ideal early childhood education. As a result of such massive demand, few international institutions came up with the concept of playschool and franchises. Opening a preschool establishment on partnership bases in India can end up being savvy business entrepreneurship.

Edusys Cloud-based ERP software is among the few very best enjoyed and favored applications for franchise management. An association typically searches for a platform with negligible highlights and modules at a reasonable cost, which helps their administration in playing out all and any operations independently. These applications are designed to help franchisor in calculating and managing the daily needs of establishments whilst examining the necessary assets which help with those requirements.

Here are the most profitable Playschool/ Preschool Franchises in India.

Kidzee, an Indian preschool institute owned by Essel Group, is one of the largest organizations. Essel Group is estimated to have 2.4 billion USD worth revenue (as of 2017) with over 10,000 employees; Essel’s Kidzee signified the importance of early childhood education and development in children. The institute, part of Zee Learn Ltd, introduced an innovative technique to teach children called, iLLUME. Such creative approaches earned the institute best “Franchisor of the Year” award in 2014.

This esteem organization sanctions franchises to potential partners, who meet the company’s requirements and standards. A prospect-able candidate looking to acquire Kidzee franchise is required to possess 2000-3000 sq.ft area in land and, 8lac to 10lac of initial-capital-investment. Upon procuring the authorization, the company looks after marketing, the school’s design, publicity, staff and various other fundamental elements like launch and development support for proper functioning of the branch.

In the year 2001, nearly 17 years ago, an organization, namely EuroKids, was established with an aim to help working women take care their toddlers, by offering Day-care facility; with teaching concepts like S.P.E.A.K, motion-based learning, Learn2Play, EuroGym and EuroMusic, the company enhanced itself into a global firm. An estimate of 1000+ preschools spread across 3 countries, 350 towns & cities; the institute is always looking to magnify their services to every corner of the world and thus, introduced EDGE 360, a franchise program.

A candidate who intendeds to partner with EuroKids can utilize EDGE 360 to establish, maintain and grow EroKids preschool. An estimate of 10-20lacs capital investment and 2000sq.ft area in land are minimum requirements to procure franchise. Once, the franchise is approved; the partner can choose a program and employ EDGE 360 to start a branch in the approved location. The organization takes care of providing curriculum, equipment and teaching staff for the school.

The following programs are offered by EuroKids International:

Playgroup: for kids between 1.8 to 3 years

Nursery: for kids between 2.5 to 4 years

EuroJunior: for kids between 3.5 to 5 years

EuroSenior: for kids between 4.5 to 6 years

Trying to compete with the top of the line preschools in the nation, AeroKids has established its name in the preschool market. AuroKids molded more than 45 schools across India and exclusively focuses on middle-income, working-middle-class communities. The company was established in 2012 with its headquarters stationed at Karur, Tamil Nadu, and started granting franchises in 2013. The organization is well applauded for providing a balance of child initiations and teacher-focused activities in their curriculum.

To partner with Aurokids, a minimum capital investment of 2-6lacs and occupy-able land spaces of 500-1000sq.ft (which may change depending upon the strength) is necessary to gain the franchise. The organization provides equipment, school designs, books, worksheets, uniforms, etc and also helps with staff recruitment.

LittleMillennium, winner of “Fastest Growing Preschool Chain In India" at International Education Awards by Times Cyber Media – 2018, is a rapidly developing educational institution in India; with Educomp, one of the largest educational institutions, to promote it, LittleMillennium has already gained enormous publicity and reputation. The company was founded in 2008 and expanded instantly within a few years because of its curriculum that focuses on the holistic development of every child, through interactive learning activities and collaborative group works.

The institution has nearly 500 preschools spread across 100 cities in India and offers the license to franchise its preschools. The minimum requirements to acquire franchise are 2,000 - 2,500 Sq. ft;of built-up area with 10-15lac capital investment.

Bachpan playschool is the lead brand of S.K.Educations Pvt. Ltd. The institute mainly emphasizes the early development of a child; by providing innovative and best programs to kids. The company was established in 2008 and has come a long way since. With over 1100 schools across 200 cities in 23 states, Bachpan achieved what it believed in and has an intention to expand by offering franchises.

In order to acquire Bachpan preschool license, one must possess 1500-2000sq.ft space in built-up land with approximate 10lac capital investment. The agreement upon authorization can be renewed every 5 years.

Start your own play school with ABC Montessori — an international preschool chain brand with presence across India. ABC Montessori is a pioneer and only Franchisee chain in India offering franchise for Authentic Montessori school. Join the Montessori revolution with the most nominal franchise fee and royalty model franchise.
Contact: Give us a Missed call at 1800-1370-130.