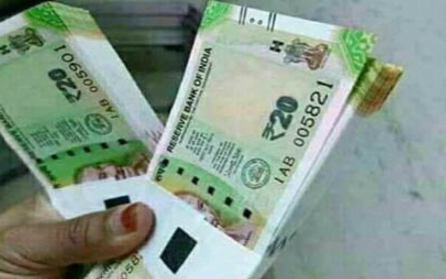 On Tuesday, the Press Trust of India (PTI) reported that the Reserve Bank of India (RBI) will soon introduce new 20-rupee note into the Indian market.

Few hours after the news about the note was released, it went viral on the internet. Many websites wrongly alleged the appearance of the note, its features, and dimensions. Fake photos and images of the 20 rupee notes are increasingly being shared on the internet and social media.

What to Expect in the Note?

According to the PTI, the new note is incorporated with several new features compared to the current one that has features like, micro-lettering, intaglio print, fluorescent ink, optically variable ink, and watermark.

The RBI is yet to release the details of the new 20-rupee note officially. But, according to the reports the note, designed under the new Mahatma Gandhi Series, is assumed to be smaller than the old version.

Features of the Current 20-rupee Note

The RBI has been replacing many notes since demonetization. Earlier, it replaced Rs. 10, Rs. 50, Rs. 100, and Rs. 500 currency notes with new smaller and colorful ones. As per the RBI’s records, the 20-rupee notes made up to 9.8 % of total Indian currency in circulation by the end March 2018.